I know these are foreign words to most Texans, but here on the
East Coast it’s the BEST TIME of the year! It’s chilly, but not freezing. The leaves are changing colors — and i don’t mean from green to brown. I’m talking about red, orange, yellow, and PURPLE. Colors that just don’t seem real!

So naturally with all this beauty around me (& as any good NE’er should) I had to pick apples & pumpkins! Together with Lenny & Kaitlyn, Will & I visited the Lyman Orchards in Middlefield, CT. It was a HUGE orchard with acres & acres of apple trees to pick from. There was also a corn maze that we did not get to attempt, due to the late afternoon showers. But we sure did not miss the market & the warm apple cider donuts. (Added Bonus: There is one Sonic Drive-In in CT. We stopped there on the drive home!) 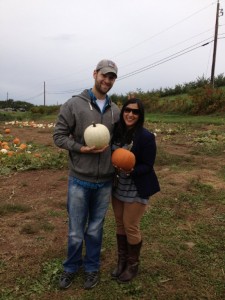 Let there be no mistake about it… I understand that Fall also means that Winter is right around the corner. And with temps in the 30’s this week, a town still cleaning up from the aftermath of Hurricane Sandy and a pending Nor’Easter looming later this week… i’m FULLY aware of the not-so-fun days in my near future. But let’s just enjoy this gorgeous season for a little bit longer.

Exactly 12 months after we met Lucas in DC, he planned another east coast Halloween trip… but this time, he landed in Stamford, CT!! He’s been talking about visiting ever since i moved here and finally he made it a reality.

We started the weekend out with dinner & drinks in lower Manhattan. Then Lee took him out all night in search of some NYC ladies. On Saturday, we were back in CT for a Pizza Crawl. To make it even more interesting, Old Man Winter showed up a few months early in the form of a freak snow storm! But that didn’t stop us from enjoying a surplus of pie at the 4 most famous pizza establishments in New Haven, CT (arguably the best in the nation).

The snow storm shut down the metro rail so we had no way to get into the city for a friend’s party… but we still got dressed up and hit the streets of downtown Stamford. Per usual, Lucas was in fine form for Halloween (see 2010 archives). And even though our original NYC costume party plans were hindered by the extreme weather, we still managed to have an incredible time that night in below-freezing temps.

Sunday morning we went to SoNo for a phenomenal brunch at The Brewhouse. We met a married couple from Texas (Brandon & Amanda Lackey) who live in Norwalk. They just moved here this year and they also joined us for brunch, so it was pretty awesome having a table full of Aggies! Sunday evening, Lucas and I went back to NYC to do a little sightseeing. I got plenty of pictures of him, but he hates taking normal pictures. So it was a struggle finding something worthy of this blog post. This is the best i got outta him –>

foreword: i wasn’t going to write anything about the earthquake, because everyone in Cali was making fun of the East Coasters for our “over-reactions,” HOWEVER, then along came Irene & her annoying little brother Lee. so this indeed deserves an entry. also, Mary Scheske quickly messaged me on GTalk and said “Did you FEEL it? You better blog about it!” So Mary, this one’s for you… sorry for the delay 🙂

Aug 23, 2011, approx 2pm EST: My co-worker Cyd and i are at our desks minding our own business when we feel the building rumble. My first thought was “Whoa! Is that the wind shaking the building?” Cyd responded with “Must be! Do you feel that??” Then here comes Juakeena, walking in the office…
[The room is still rumbling at this point]
Me: Juakeena, do you FEEL that??
Cyd: is it crazy windy outside?
Juakeena: no, i just went on a walk… it’s not windy at all.

I looked out the window to confirm that trees were in fact, not swaying. And then i hit the world wide web. It took me all of 2.3 seconds to confirm on CNN.com and then again on Facebook & Twitter that we just felt the earthquake all the way from the Virginia/DC area!! There was no damage at all here in CT, but i definitely got to FEEL my first earthquake!

Then, Tropical Storm Irene was a’brewin’… and about 5 days later she showed up on our doorstep as a Category 1 Hurricane. NYC & Stamford (where i live) seem to be the only places around here that did not get tore up by Irene.

Greenwich was without power for almost 2 weeks, and many streets were completely blocked by downed trees. Norwalk had plenty of flooding. But the major devastation occurred along the central coastline in Milford & Fairfield. Waterfront homes were swept away, neighborhoods were under water, and there were even a few deaths caused by Hurricane Irene. If you’re interested in seeing more pictures of the damage, click here: CTPost.com Slideshow

Right after Irene hit, I had to travel to Texas for work again (not complaining!!) and that’s when Tropical Storm Lee showed up. I was lucky enough to be able to extend my work trip to include some aggie football. I  made my glorious return to College Station, Texas just in time for the 1st game of the season: A&M vs. smu… which resulted in a Win, duh! The only negative was the hurricane-like winds that Lee was churning up in the gulf. Tents were blowing over, EZ-ups were taken down and my hair was just a dang mess 🙂 But the tailgatin’ went on!! We were all set up at 8am and drinking beer well before noon. We didn’t get a drop of rain in Texas, but the east coast got pounded again with tons of rain, courtesy of Lee.

Now here we are in the last week of September, and temperatures are in the 60’s & 70’s during the day, and in the 50’s at night. Yup, it’s officially Fall. Not gonna lie, i really like this time of year here 🙂 It’s hard to believe in two short months we’ll be knee-deep in friggin’ snow. I’m gonna enjoy this while i can!!

Recent Posts, by yours truly…

Take a Trip Down Memory Ln

Stuff i blog about…

Oh snap, my friends have feedback!