Julia & I ran the Hartford Half Marathon on Saturday, October 13th. It wasn’t my fastest time, but it was definitely the most enjoyable race to date.

We drove to Suffield, CT on Friday night and stayed at Brett’s mom’s house which was a 20 minute drive to the start line. After the race, we had lunch at Salute & then we stopped at a local farmer’s market to buy the world’s most delicious honey greek yogurt & homemade ice cream. What a treat!

In January 2012, a full two years after my big move to the NE we finally booked a winter trip to Bromley Sun Mountain in southern Vermont. (backstory: The first and only time i participated in snow sports was in 2004, during an APO national convention. We took a train from downtown Denver to Winter Park Colorado. I skipped my beginner lesson because i was a natural on skis and was up on some pretty decent Blues by the end of the day!) Will & Lenny have snowboarded before so i decided to give that a try this time. As an added bonus, Claudia planned a visit just in time to join us!

We all headed to Vermont around 4pm on a Thursday. Arlington, VT is supposed to be a 3 hour drive from where we live. However, due to snow/icy weather & questionable narrow/dark roads we arrived at our cabin around 9pm. Scates, John Louis & their ladies would be joining us the following night but we wanted to be up early on Friday for a “Snowboard Starters” group lesson so we arranged to be at the cabin the night before. The next morning, we lucked out and got placed in a small group with two very talented and helpful instructors: Tony & Ollie. They taught us the basics and had us making turns by lunch time. After lunch, we got up on the lift and made several passes down a mild course. Will happened to be the snowboarding all-star in the group and he was connecting his turns like a pro!

Even the guys (who had taken lessons before) were surprised at how great our instructors were. We were all doing very well on our boards. On day one, we had about 5 full hours of instruction and even though we were all exhausted and ready to call it a day… we were still very much looking forward to day two.

When we got back to the cabin we got cleaned up, made some dinner and waited for the rest of the group to arrive. Once everyone arrived we partied a little bit, some more than others (ahem, CLAUDIA ha!) but we were all up the next day and back at Bromley for more.

It was a fantastic weekend, and two days of snowboarding was all that it took to get me hooked. Our friends who live in Norwalk (the Lackey’s) are avid snowboarders and they inspired us to buy our own equipment. When we got home, Lenny introduced us to Joe (the owner of Capsule Board Shop in Cos Cob) and less than 2 weeks later I was a proud owner of a new beautiful Signal Snowboard! Will’s board came in a few weeks later… it took a little longer to arrive since he had to special order one in his size. We are now itching to hit the slopes again ASAP. We’ve got multiple friends who want to take weekend or day trips with us, so i’ll continue to post about our new fun hobby!

oh yes, the Boston Beer Marathon happened again…and this time we showed up with 9 more people! we started at the House of Blues just like last year, but this time we actually made it to Allston for the last 8 bars or so <– major accomplishment!

i think the best part about this year was having a few Texans in tow… a college buddy of mine, Lee Bernhoft, recently took a job in Stamford, so this was his first chance to get to really party with me, Will and company on the East Coast! Lee had a FANTASTIC time to say the least… and he even started a bro-mance with the charming Mr. Martti Thomas. I even got a call the next morning from Martti and had to text him Lee’s digits! LOL Those two were a match made in heaven! Watch out Southern CT: Lee & Martti are on the prowl! oh yeah, so Lenny has been calling me “T-Toast” (short for Texas Toast) since we met… so it was only fitting that Lee got his own nickname as well: Lee Toast.

Even more Aggies/Texans met us in Boston – Amanda & Brandon Lackey are a couple who recently moved to CT from Cleveland. (Funny story actually: on lee’s 2nd day in CT he was walking the streets of Stamford and he saw a guy unloading stuff from his vehicle which happened to have an “A&M” sticker on it. Of course, Lee was wearing his maroon Aggie shirt so he stopped and introduced himself. Thankfully, since we’re just a friendly bunch of people… Brandon and his wife joined us a few weekends later in NYC for the Lonestar Chili Cook-off. And the rest is history…) Despite Brandon’s horrific case of food poisoning in Boston on Friday night, he was out on the streets with us like a champ on Saturday. It was great being around other Aggies in Boston.

*The Great Boston Experience is becoming so successful that they are planning on duplicating it in other major US cities. It is official… the Big Apple Beer Marathon is scheduled for Saturday, September 24th! The Beer Marathon is coming to NYC 🙂

My sweet co-worker, Lisa Haughey, gave me the privilege of enjoying my first Yankees baseball game when she invited me & Will to join her & Nick on Monday, April 25th at Yankee Stadium in The Bronx. The Yanks ended up losing to the White Socks, 2 to nothing. But that didn’t seem to bother us! The seats were amazing… section 210, row 4. We were in perfect foul ball territory and the weather was cooperating, for the most part.

As an added treat, Brett & his wife were heading to the same game so we enjoyed their company on the train ride in. Cool thing about the trains here: On game days, there is an express train called “the clipper” that leaves Stamford and goes directly to Yankee Stadium, no stops! Thankfully, we were able to use our ten-trip passes that we’d already purchased for frequent travel between Stamford & Grand Central. This couldn’t have been easier!

The scene at the Yankee Stadium-153rd train station was incredible. A sea of navy blue and pinstripes engulfed me. People were wearing their classic NY hats or the traditional pinstripe jerseys, or in most cases, BOTH. They were already chanting “Yankee’s Way!” and getting each other riled up, even though we still had a good walk before we were near the stadium. As odd as it may sound… it was the closest feeling to Texas I’ve had since I moved here. I felt like I was in College Station, Texas… walking towards Kyle Field! 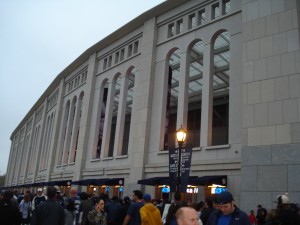 The remnants of the old ballpark still live in the shadows of the new enormous structure. Kinda cool, but kinda sad too… the old home plate looked like a little league practice field.

Once we got inside, it was pretty obvious that there wasn’t a bad seat in the house. And no matter how many pictures we took, nothing could do this place justice. We settled in with a couple of beers and a large order of the famous GARLIC FRIES. And boy oh boy… all I can say is: Good this it wasn’t our first date! The garlic fries were amazing, as expected. But I kid you not, the taste radiated up my trachea for the next 24 hours. A Hebrew’s National footlong, some chicken tenders and two more $11 beers completed our well-balanced dinner for the evening.

There was a proposal on the big screen and a few famous people in the crowd. During the 7th inning stretch, a few gospel singers came out and butchered “God Bless America” (sadly) and the awesome Grounds Grew came out to comb the field and do the “Y.M.C.A.”

All in all, it was an awesome experience. And for the record… despite going to a Yankees game, I’m still 100% Texan 🙂

Super Bowl Sunday marked the one year (plus one week) anniversary of my big move. In conjunction with my 28th birthday… i thought it’d be a great day to have a party 🙂 “Dontcha-think??” Everyone contributed to the delicious spread of food and drinks. I was so busy having a good time that i totally missed Christina Aguilera’s remix of our national
anthem!

Recent Posts, by yours truly…

Take a Trip Down Memory Ln

Stuff i blog about…

Oh snap, my friends have feedback!